skip to main | skip to sidebar

Landscape Photographer of the Year Exhibition is taking place now at the National Theatre on the South Bank.

I went today and found it very enjoyable. You can see large prints of some wonderful captures of UK landscapes as well as projected image of some more that didn't make it to the print. I enjoyed trying to select the best image, not an easy thing to do given that most images there were really outstanding.

Check it out, it should be fun

http://worldwidephotowalk.com/walk/camden-town-england-united-kingdom-camden-market/
Posted by Nina at 23:11 No comments:


Wonder around the old town centre
Opportunity to visit the exotic Regent’s Palace (note no photography allowed inside)
Beach and the piers at sunset
Last but not least : Fish and chips.

Notice will be posted at the club. Please respond registering your interest for this outing by signing. Please also indicate if you are willing to drive.

It was all change at the top following the final round on 19 May of this season’s digital projected image competition, when the judge was Gerald Kitiyakara, LRPS. In the Standard Class, as expected long time leader Grace Kwong was finally overhauled by Martin Shorey, who had the disadvantage of not being a member when the first round was held. In the event, he was a clear winner with 110 points, with Grace second on 102 points just ahead of Ray Roberts who had been scoring steadily throughout the competition. An interesting statistic is that Martin scored 22 points out of a maximum 24 in each of the five rounds he competed in. An impressive feat of consistency.

In the Advanced Class, Rose Atkinson had been the clear leader since a near maximum score in the second round, only to be pipped at the post in the final furlong by a fast finishing Nina Ludwig. Nina had not scored well in the first round, but had otherwise been achieving some excellent results in the remainder of the competition, including the final contest. Nina ended up with 110.5 points to Rose’s 108.5 and Bill Yates was third with 101.

(For those not familiar with the club's scoring system, in each round the two highest marks from three images are used to give the round total. When all the rounds are tallied, the lowest scoring round is excluded, hence the change in fortunes that occurred in both contests.)

In the Standard Class, pictures of the evening came from Mike Day, with "Night Clubbing", Adam Lesniewski and "Close Encounter", and Martin Shorey who submitted "Slamdunk". In the Advanced Class, Nina Ludwig with "The Chase" and Michael Hope with an untitled image both achieved top scores.

It is pleasing to note the new faces at the top of the Standard Class, which is encouraging for the future, as well as Rose’s success in the Advanced Class. Well done to everyone who finished in the top positions in both sections.

Attention now turns to the new Digital Projected Image of the Year competition, for which the "Mees Trophy" will be presented for the first time. The winners of each class will be going head to head, but with the top image on the night taking the prize, will the other members of the club have a say in the outcome?

Seven intrepid members of Croydon Camera Club travelled back in time to visit the Bluebell Line’s “Southern at War” World War II re-enactment event on 9 May. Setting off in 2010, the group was soon transported to the wartime sights of the 1940s, without a blue police phone box in sight!

Perhaps one of the most surprising aspects of the day is just how many people take advantage of such occasions to dress up and recreate scenes from so long ago. It was obvious that there had been great care to ensure that costumes were as authentic as possible, with vehicles and other equipment restored to former condition. Fortunately, this was as realistic as it got, although there were a number of demonstrations throughout the day to enhance the experience and give a feel for the challenges faced by those who lived through the period.

For us photographers, the occasion added to the usual attractions of the railway and provided many opportunities to take shots that would not be possible at other times. Perhaps the only downside to the day was the chill wind that kept temperatures unseasonably low, which must have been uncomfortable for many of the participants as their 1940s attire was not really designed for the wintry weather.

After an enjoyable day’s shooting, Croydon’s members retired cold, but refreshed by the outing and the company of their colleagues. 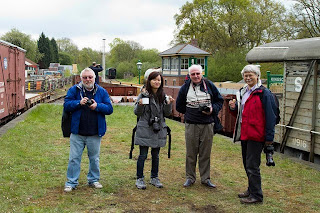 Ian, Grace, Ron and Ashley take a break. meanwhile Mike Day is in the background still shooting away! 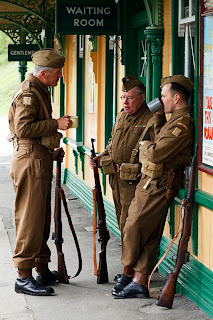 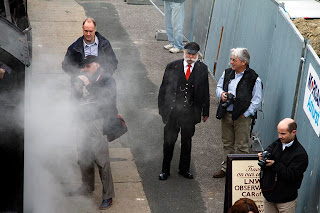 Mike Day waits his turn while Ron takes a shot and Adam talks to a participant.
Posted by Michael Farley at 18:56 No comments:

The Bluebell Line steam railway held a special event entitled “Southern at War” over the weekend of 8–9 May, with re-enactors, military vehicles, displays and concert parties recreating the days of the Second World War. Mike Farley organised a trip for club members, who met at the Club at 9:30am and drove down together for the day.
Posted by Ashley Shepherd at 20:26 2 comments:

What Do You Think of our Photographs?

Visit our Web Site
...and give us your reaction to our photographs. In fact, why not check what we're doing and then join us at our weekly meetings.
Posted by Ashley Shepherd at 07:20 1 comment:

Good work, Ashley. Another way for members and the rest of the world to communicate with the club.

Mike
Posted by Michael Farley at 00:15 No comments:

Have a brilliant idea?
Why do YOU use this web site?
What do YOU want to achieve personally?
How do YOU think it could better help the club?
It's YOUR ideas that are important.

Here are a few thoughts to get you started.
Posted by Ashley Shepherd at 20:12 No comments:

What would you like to learn more about?
What do YOU want to achieve personally?
How do YOU think other club members can help YOU?
It's YOUR ideas that are important.
What would make you feel YOU BELONG to YOUR club?

Have a look at our web site for some ideas to get you thinking on what we could do.
Posted by Ashley Shepherd at 20:08 No comments:

We are Croydon Camera Club, founded in 1890, and one of England's oldest photographic societies. It is located in Croydon, south of London, England.

Today, we are a Club of enthusiastic photographers with a wide range of styles and interests.

We meet every Wednesday evening (except during August) in the Croydon area.